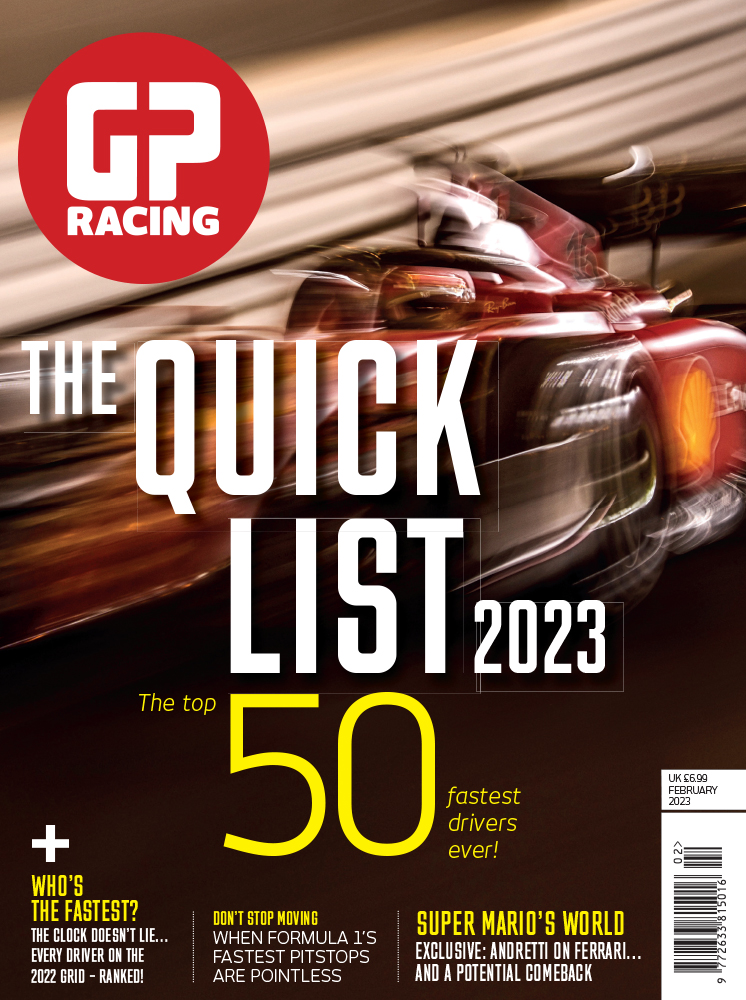 Speed. With the possible exceptions of noise and glamour, it’s what drew you to motor racing, isn’t it?

Within these hallowed pages this month we embark on the risky business of quantifying speed and establishing who is the fastest, both in terms of the current crop of drivers and the history of the world championship. I say ‘risky’ because any such exercise is bound to be contentious, since it potentially treads on the toes of blinkered fandom and tribal allegiances.

So let’s set out our stall right here. Our 2022 ‘Supergrid’ (p38), in which we rank last season’s drivers in order of pace, is as rigorously mathematical and as laden with caveats as it is possible to be, given the obvious differentiator of car performance. Even when excluding factors such as car damage, wet races, early retirements, and late stops for fresh rubber to bag the fastest-lap point, the grid forms a natural shape with the fastest cars towards the front and the slowest at the back. Unless you’re Alex Albon, of course.

Perhaps most interesting and significant are the gaps between those in equal machinery. In the spirit of maths class, Alex Kalinauckas submitted his workings-out in a spreadsheet with multiple tabs.

Ranking the 50 fastest drivers in F1 world championship history (p20) was naturally a less scientific exercise, since Juan Manuel Fangio (for instance) is obviously unavailable to enter into a back-to-back comparison in identical machinery with the likes of Max Verstappen. Nevertheless it was a fascinating process and, I hope, something which will spark lively debate during the off-season.

We reached our final list via a jury panel representing a broad range of nationalities and hands-on experience – some of the members of the jury have worked closely with drivers on the list. If reading it moves you into a dyspeptic frenzy, please bear in mind the intent is to entertain.

While any such survey is prone to recency bias, it was pleasing to note the presence of several long-departed drivers in the final list, including ones whose career achievements perhaps fell short of their potential. For that was what we told all our ‘Quick List’ jurors: this isn’t a roll-call of F1’s greatest drivers, but the fastest. If you want to see a list of drivers ranked by world titles and races won, visit Forix or even, dare I say it, Wikipedia.

What we aimed to do with this list was to celebrate those drivers who ignited our passion for motor racing in the first place: people who were, simply put, sizzlingly quick. While two of the drivers present are multiple champions who have publicly advocated winning at the slowest possible speed, they weren’t exactly slow. Unless you think when Jackie Stewart won the 1968 German GP by over four minutes, he was holding back a little bit?

This month's features include

The quick list 2023
A star-studded jury vote to rank the fastest, not the greatest, drivers in 72 years of Formula 1

Who was quick in 2022?
Last year’s fastest drivers ranked by one-lap pace

In conversation with...
Fernando Alonso about his first test for Aston Martin

Now that was a car
The last Lotus Ayrton Senna drove, the complicated 99T

View offers
Get the print and digital bundle
Or are you looking for a print-only subscription?